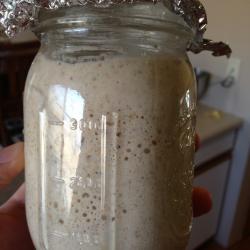 Just wanted to post some pics of my first sourdough starter.  "Betsy" is currently on day 9 from creation following the Beginner's guide to "Make your own Sourdough Starter".  Today is the first day she's actually doubled since her daily feeding (Fed her at 9am (CST) and at 1:30pm (CST) she's doubled).

So that being said I wanted to ask some advice for the easiest recipe to try on my very first sourdough loaf.  I'm planning on baking on Saturday after feeding her again in the morning and waiting until the same time to make sure she's as active as possible.  I've purchased my own proving basket (8inch round).

Any suggestions on an easy loaf to start with would be much appreciated.  Currently I just have the Organic White Whole Wheat Flour and Rye Flour I've been using to feed Betsy.  I want to make a few loaves to try for the first time.

Looks like you are off to a flying start.  Well done.

I would suggest that you cannot go far past following SourDom for technique and his Pane francesa recipe that he gives in his blogs (the 100% sourdough one).  I would also suggest that you plan to stick with that one recipe for a number of bakes until you get the feel for how the dough develops and the timing required for your conditions.  Above all, don't be disheartened if there are a couple of loaves that do not work out as you might expect. It won't be to do with the ingredients - it will be technique and timing.  In any case, I have never heard of one that was completely inedible.

Appreciate the support Frainam.  I noticed there are three variations to the Pane Francese Recipe. One which requires the Sourdough Starter, a Biga version, and the Sponge version.  I'm assuming the later two are renamed due to the yeast which is used?

My second question on the Pan Freancese (1) version is it states 1 tsp of the starter then below there's another entry for 180g of the starter (36%).  The first part I'm assuming is ensuring the starter is ready and fed & active before mixing the dough.  Now from what I've read the starter I've made is 100% hydration, and the recipe has several percentages following the different ingredients.  Could you clarify on those?

There are some variations in terminology used but a biga is usually a dough like ferment (often overnight) with bakers yeast that is then used (often with more yeast) to make the dough and this adds some complexity of flavour to a yeasted bread.  The sponge method is similar but at a higher hydration and is sometimes called a poolish (which I gather is a word that derives from Polish as this was a method favoured by bakers from Poland - but that might be ephemeral).

In SourDoms method, he uses a small amount of culture to inoculate the flour and water that makes up the starter for the loaf.  The 180g so made is what goes to make the dough after a suitable period for the (loaf) starter to get active.  This is sort of equivalent to what baker's used to do where the scrapings left in the starter container after making the dough for baking was what inoculated the new starter for the next day's bake.

Another method (that I use) is to take 90g out of your mother culture and make that up to 180g with fresh flour and water (45g of each) and leave that to activate as before.  Add fresh flour and water (45g of each) to your mother culture and store it away (in the fridge?) for next time.  Because of the higher starting concentration of yeasts and bacteria in this starter it is likely to reach full activity sooner than the other method.

The percentages are what are known as baker's percentage and are useful for scaling recipes up to larger quantities and just represent the relative proportions of ingredients in relation to the amount of flour used.  The situation for sourdough is sometimes a bit confusing depending on whether the calculation has taken into account the flour (and water) in the starter.  For general use, just work from the mass values given and adjust them pro rata for larger or smaller quantities.

Let us know how you go and get on bakin'

So I was following the recipe for Pan Frea and the one thing I did notice is that my starter seems to peak around 8-10 hours after feeding it, where as if I leave it for 24 hours it seems to diminish in volume and activity.  Should I then be shooting to start my dough around the 10 hour mark after refreshing my starter, when its at as much volume and bubbles as I've seen, and if necessary prove in the refridge until the next day?