Does my starter need more time to ripe? 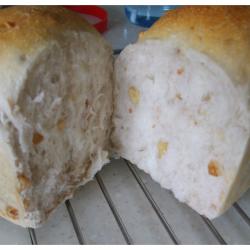 Finally I've got my starter and made my first sourdough bread ( ? )  without using commercial yeasts.

It looks good , but I think, a bit small in size.

When making bread dough with the sponge which had been fermented for overnight with my starter,

it took quite long time to make the dough doubble in size for bulk fermentation.

It was about 3 hours, but  now which was turned out still not enough, I guess.

Is my starter less ripened ? Do I  go further with my starter a couple of days ?

In general, how long does bulk fermentation take for sourdough

and how about the temperature ? Is it same as yeasted dough or lower ?

Anyway, I am very happy with my first sourdough bread even some problems are still around us.  : )

Molifemo- That's a lovely pan of rolls. You can see by the oven spring ("kick") that there was plenty of vigor in your starter. The texture is very, very nice, and the rolls have a good round appearance on top, so your fermentation was long enough and the dough developed enough strength. You have a nice blush on the top of your rolls, so your oven temperature and time are good. (You could easily make your rolls a little darker, if that's your thing, but that's up to you.)

Your sour culture will settle into itself over the next few weeks, and if you keep using it you'll get a feel for what works best. Of course, using a culture is different from using production yeast because it keeps changing depending on what stage  it's in. It takes time to figure out what your sour will do for you in your environment.

First of all, thank you for your kind reply.

The oven spring was not big as much as I thought and as other breads with commercial yeasts.  Does this mean that my culture is not ready yet ?

I have one more question . As you said, if sour cultures keep changing then how do commercial bakeries maintain their cultures to get even quality of product ?  I think even quality of breads would be very important for them.

Those are good questions- I'll share my thoughts, but others may have more useful ideas.

"Oven spring" depends on a number of different variables, including dough strength (itself dependent on multiple variables), fermentative strength (ditto), oven temperature, oven humidity, and the heat of the hearth.

I'll try to start with the three that are easiest controlled, which are the oven temp and humidity and the hearth temp. And, I'll stick my neck out and say a couple of things I'm not sure of, and I may get corrected- that's OK!

Here are the thoughts.

About oven temp and hearth temp: if your oven has been idling empty for a while and the temperature is evenly distributed, and it is well dried out that is one thing. It will have lots of stored heat in the walls and hearth and the atmosphere will be quite dry. Slide a nicely proofed pan of rolls onto that hot hearth and the heat of the hearth and of the air will immediately accelerate the fermentation- which causes oven spring, or kick. If the dough is on the moist side it will keep the crust flexible before setting longer than if the dough is dry. If the atmosphere of the oven is humidified somehow (spraying, adding several loaves at once, putting ice cubes in, whatever) then the dough has more chance to expand before it sets. And, an enzymatic reaction occurs that increases caramelization and makes the crust shiny and dark. That's another story, but it factors in.

Dough strength depends on the amount and quality of gluten in the wheat and the "development" of the gluten. "Development" is what happens when isolated molecules of gluten bond together into megamolecules, forming a homogenous structure that is elastic and strong and which will capture the gas given off by fermentation. Development occurs both through mechanical (mixing) activity and chemical stuff- it is a large part of what drives mixing times, turning the dough, or punching or folding it, and how long it stands before make up.

Fermentative strength is interdependent with dough strength. As yeast digests sugars and carbohydrates it reduces the load it has to carry (sugars are an issue for yeast: they not only demand that the yeast split them up into smaller, simpler pieces, they also try to draw water across the cell wall from the yeast instead of allowing water to cross into the yeast cell, and that's backwards to what we need the yeast to accomplish). There is also a downward pH shift that happens to wet grains independent of the presence of yeast, and which affects how dough behaves, and how nutrients move across cell barriers, and has a lot to do with the way doughs handle. [If you want to visualyze how a lower -that is, more acid- pH affects bread proteins  (gluten), wash your hair (very proteinaceous)  in a typical alkaline shampoo and then rinse it with dilute vinegar. When the hair is in an alkaline state the cuticle will be swollen, and the hair will feel slippery and thick; as soon as the acid hits it the cuticle will shrink, and the hairs will feel thinner and and not slippery].

At the same time the quantity of yeast in the dough is growing, up until it starts to die. There comes a point in the fermentation when all the stars align, as it were, or, on a bad day, they don't, and won't, and that's that. But what we try to get is a sour, that is, acid dough that isn't overly acid, is strong but extensible, has a fair amount of available food, but not too much,with an active, vigorous culture growing within it, and all these things come together at the same time.

Well, it takes practice. You can't do better than to just keep at it. Try to standardize things as much as you can, keep notes, and keep at it. You're off to a fine start, and it'll all come together for you.

As to how commercial bakeries do it I just have to say that sometimes it works and sometimes it doesn't, and we just keep trying. I know that all the "famous" bakeries have times when it just doesn't work for them- it's just like gardening.

I know this was a rambling, difficult post, but I hope you'll find a little big in it to help you solve the puzzle.

Thank you for the very detailed explanation.

I have to confess that I have to read your posting again and again until I get understood.

To be honest with you, there are some parts that I couldn't understand fully now, but I will try to get them for the next weeks.

I'd like to make bread like yours if possible. It looks delicious! Do you mind posting your recipe? Thanks.