From cook to baker 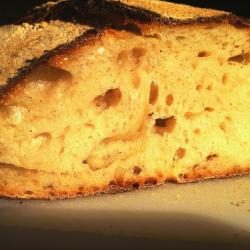 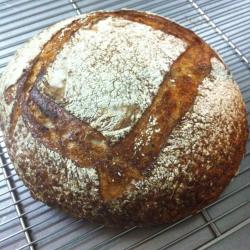 Most people believe that a restaurant cook, a baker and a pastry cook are about the same. I'd tell them that we have one really thing in common, we work with food, after that everything changes. Our schedules are different, our rhythm is different, our habits are different and in many cases we don’t even get along. Ok, I may be exaggerating a bit, but the truth is that all of us normally have a love for cooking may it be based more on proteins, sugars or starches.

I’ve always liked baking breads, but I always had a baker to do that, and keeping control of the other areas of the kitchen were hard enough so I never really did it. But the baking bug has grown too strong for me to deny my need to make some good old fashion bread. So here I am starting my quest for the perfect, at least for my taste, sourdough bread. The good thing about these types of quests is that the true joy and fulfillment will come with the journey and not the destination sin perfection can never be achieved, but that doesn’t make the search less enjoyable.

After reading through blogs and books I decided to try out a simple recipe following different advices and see what came out.

I must say the bread came out better than I expected and though it was good enough for a nice sandwich, but, there’s always a but, it obviously needs a lot of work.  Write know I'm focusing on the flavor and texture and I hope with practice my shaping and slashing abilities will improve. I think my biggest mistake were that the crust came out a little too dark in some spots and the bread was a kind of chewy. The flavor and smell were nice and the bread was moist which created the chewy feeling.

I read some ware that I should try to achieve an internal temperature of 99C, just below boiling point. Since I live above 2000 meters and water boils around 96C I thought I'd shoot for 95C. After the 45 minute bake the internal temperature came up to 91.5C which I think could account for the moister I felt in the bread.  I liked the crumb which came out with a nice shine.

I know it looks like a brioche, but believe me the crumb is white. Next time all use better lighting.

I hope to hear some comments and suggestions while I keep trying to bake better bread.  At the moment I'm fermenting a second batch with the difference that I gave this one a 24 hour first fermentation at 5C. I'm also planning on modifying my bake temperature.  Instead of 45 minutes at 232C I'll try 30 minutes at 232C and then 30 minutes at 170C.  I'll upload the result hopefully reporting some good results.

The flavos was about the same, but the crust came out better. On the downside it didin't rise as much.

I remember reading somewhere about Hugh Fearnley-Whittingstall of River Cottage fame in the UK, who said something like that he always thought bread was too simple for a real cook, until he tried it and really got into it. I don't think most people know how specialised many chefs are, and as you say how much difference there is between cook/baker/pastry chef.

Despite all that, I would think that any good chef's depth of knowledge would be useful in tackling other areas.

I agree with you that reducing the temperature for the second half and extending the time should raise the internal temperature.

Perhaps another flour or adding oil will soften the crumb?

At first it does help having some background in the kitchen but after the basics its a new ballgame, Fearnley-Whittingstall was correct. I did my second bake last night and since it has the dough I used for the first bake I didn't expect the flavor to be that different.  What I did modify was the time and temperature.  Instead of baking to loafs yesterday I kept half the dough in refrigeration for a slow 24 hour fermentation. The next day I proceeded to shape, prove and bake.

Since I over baked my last loaf, I changed the cooking temperature to 232C for 30 minutos plus another 30 minutes at 170C.  This time the coloring was much nicer put the loaf didn't rise as much. Could this be from extra moisture adquiered during the long fermentation? I hope I find out as I keep on experimenting.

Yes, much is specific to sourdough.

A good chef understands the importance of precise measurements and temperature - timing and temperature are very important in sourdough. But there is a lot to learn which really only applies to sourdough and not to other areas of bakery.

No, there is no actual moisture acquired during a fermentation, but the viscosity of the dough will change due to the processes happening during the fermentation. Understanding those processes, and learning how to know when a starter is ready to use, a fermentation is at its prime, and when the proving is perfect, is a very large part of the successful art of sourdough!

The Leahy covered pot method is interesting. This allows you to

b) without overly burning or getting overly thick crust since the covered container retains moisture from the loaf and thus there is much less drying out than otherwise in a convection oven, which is why you have to bake at far lower temps than with a radiant heat brick oven. I can bake a loaf at 720F/380 and although at the end the crust will be very dark, it will also be relatively thin, I think because the inner crumb is cooked more quickly than in a convection oven so it leaches more steam into the outer crust area sooner preventing it from becoming so thick, and also the baking time is of course less at higher temps. I don't think one would get good results at such temps in a convection oven. In any case, using a covered pot emulates more aspects of radiant heat so you might want to play with that. I have never tried baking with a professional steam-oven but if you have one that would be interesting too I suspect.

It sounds like your experience is already telling. You are taking a great approach in terms of just learning by experimentation. Of course you get better feedback/learning by introducing just one new variable at a time.

In the first pic the crumb in the middle of the loaf looks fine in terms of being done but of course you are right - if baked longer it would dry further. 195F is on the low end of being definitely done, which I believe is the point at which the starch has gelatinized (?), so 91.5 qualifies.