How to Care for Bannetons 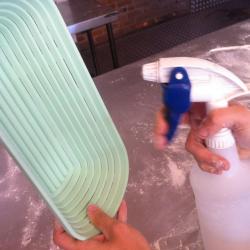 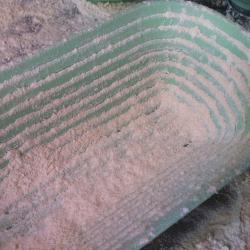 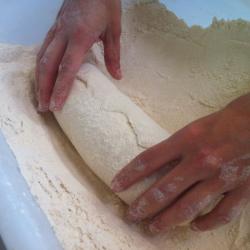 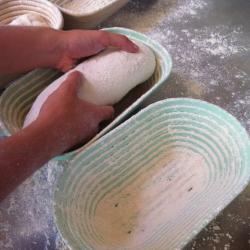 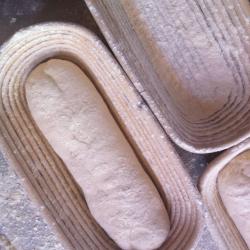 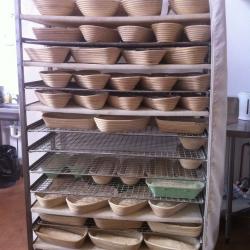 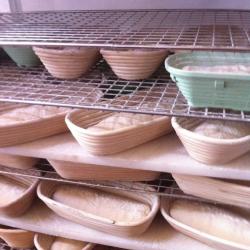 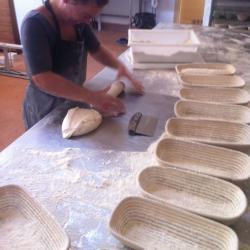 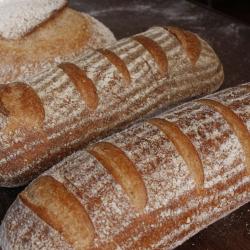 New bannetons are ‘green’. That is they are not ready for use until they have been conditioned.

Both cane and plastic bannetons work best with a thin build-up of flour and moisture. This helps to mediate moisture and temperature as well as providing a good surface to retain dusting flour. Under these conditions your dough will rise well and leave the banneton smoothly before baking.

It takes at least 3 uses to achieve a film that is stable enough to mediate moisture / temperature (humidity), retain dusting flour and facilitate easy release of your dough.

For the first use only, you can help to condition your banneton as follows:

Ideally a very thin layer of flour will stick to the cane or plastic. This is the beginning of your flour and moisture build up.

Sprinkle or dust flour in your bannetons before every use. Ideally the flour will fill the cracks between the cane or plastic spirals. Too much flour will mask the beautiful spiral effect that bannetons are famous for...but during the first few uses you may need to use extra flour to prevent sticking.

As discussed earlier, the aim is to build up a thin layer of flour and moisture, which helps your dough leave the banneton before baking.

Once you are happy with the film and the way your banneton is performing, lightly brush and tap the banneton after every use to maintain that layer.

Cane and plastic bannetons are for proving only. Do not bake in the bannetons!

Bannetons work by creating their own humid micro-climate between the dough and the banneton during proofing. Bannetons encapsulate most of the dough, but the top of the dough is exposed and should be protected from drafts.

Professional bakers prove dough in cupboards, on shelves or in draws. At home you can simply throw a dry towel or other cloth over the top of your banneton.

The best place to to prove your sourdough is in a standard room without drafts, at temperatures of 8C to 18C, with warmer temperatures (up to around 25C) also being used successfully by some bakers.

There is no need to build a humid proving cabinet as the banneton is the prover!

We have used these bannetons for many years in our own bakery and training centre.

As discussed earlier, the aim is to build-up a thin layer of flour and moisture, which helps your dough leave the banneton before baking.

Once you are happy with the film and the way your banneton is performing, lightly brush and tap the banneton after every use to maintain that layer.

Washing - Yes it is O.K to wash cane and plastic bannetons when required!

Occasionally, after many uses, the build up of flour /moisture may become thick and crusty and start to look scaly rather than smooth.

By this time you may even have excessive mould build up...thin layers of mould are quite acceptable...but not big chunks!

This is the time to soak (20mins) and scrub (washing-up brush) your banneton in cool tap water (no soaps!) and leave it to dry in the sun.

Professional bakeries wash their bannetons every 6 months to 2 years, depending on usage and how regularly (if at all!) they brush them out.

Correct storage (see below) will reduce the chance of mould occurring.

Mould can be further controlled by:

To prevent excessive mould build up, bannetons should be stored dry when not in use. Store bannetons away from humid environments and ensure that air can circulate freely between each banneton. Find ways to avoid stacking bannetons directly on top of each other (stacking creates more humid environments suitable for mould).

At home you could consider the top of your refrigerator or simply use a kitchen shelf.

This is good stuff.

I wonder is there a way to get this and other beginners stuff (without the long discussions) into a read only area that has a separate link so that it doesn't get buried in the general blogging.

Yes I think this is a great idea. Graham and I were discussing something like this yesterday. There will soon be a new 'beginners' or 'guides' section. Let us know if you find any other content suitable for this section.

...and I love the look of your breads.

I used this information today.  When I finished backing today I cleaned up my Banneton then I dried it in the oven on a rack as the oven was cooling off.

Graham do you use reagular wheat flour in your bannetons?  I have been using rice flour for a long time but I never had the directions on how to use the bannetons like you just gave.

I use mostly rice flour in mine LD, but have also used wheat, rye and even bran. They all seem to work fine.

Thanks for the compliments about the guide (and bread too TeckPoh!).

I know one baker that uses corn starch, probably wheaten corn starch, to retain brightness of dusting flour in the oven. Recently I made Hot X Buns and mixed about 30% corn starch (corn, not wheaten) into the X mixture and that definitely helped the cross to retain it's brightness.

This is sounding like an ad for fabric whitener, but actually I'm not trying to achieve a white-as-white look, I just don't want the dusting flour going too dark....which can happen because my baking times are quite long.

As for rice flour, semolina and the rest, I have tried them but have never been happy with the texture of these slightly coarser flours on the finished crust. I'm conscious of people with sensitive teeth not enjoying the roughness of the dusting, which is usually partially impregnated into the crust and can't be dusted off.

There is no doubt that the coarser flours reduce the chance of dough sticking to the banneton, but we have found that by storing bannetons dry we get very few terminal sticking incidents (perhaps 1 or 2 in 100, or slightly more sticking if bannetons/batards were proved under refrigeration).

Where can I get bannettons from for the UK market?

I tried some of my milled whole wheat flour and the dough stuck really bad like.  The bread had really great oven spring and the loaf turned out fine.  I'm not sure how anyone keeps from having the dough stick with wheat flour.

And there I was tapping and brushing away every last bit of flour I could see on the banneton.  Oops!  I was wondering why my loaves kept sticking while trying to get them out of the banneton.  This has been a great read, thanks!

We are finding that the style of plastic banneton shown here does not accumulate as much flour build up as the cane bannetons. The flour moisture layer builds up lightly before it 'flakes off' the plastic.

The benefits of this are a cleaner looking banneton less prone to mould. However more care is required when using sticky doughs or proving in humid environments (make sure both the plastic and dough piece are well covered with flour).

Have you experienced using disposable hair nets to line bannetons, and would this prevent the sticky problem with the plastic ones?  I saw a baker using this system at Brasserie Bread in Melbourne and it looked like the net could be reused for the same purpose?

Brasserie use the nets in order to comply with HACCP (Hazard Analysis Critical Control Points) standards. The potential hazard they are removing is the chance of cane fibre entering the bread dough from willow bannetons. We use Willow bannetons at my bakery and have never had a piece of cane enter the dough, but it is something that HACCP Certified bakeries have to consider.

Plastic bannetons are popular with HACCP Certified bakeries because the above hazard is removed. However I have never heard of any experiments with hair nets in plastic bannetons. I doubt they would reduce the potential for dough to sweat and stick, though they could give the baker a way of pulling on a stuck dough.

I also use plastic bannetons, and have hair nets....so can experiement on a loaf or two if you like.

Hi Graham, I'm wondering if you have tested the hairnet method with the plastic bannetons? If so what was your result?

I haven't tested hair nets yet...but I'll give it a go in the next few days and let you know. Graham

hi graham! thank you for this website. am just an ocasional home baker, and i have a couple of cane bannetons that i use when i make sourdough. i've built up quite a thick layer of crusty flour on it and it's really helped with releasing the dough with a nice swirly pattern.

except i haven't baked in months. when i returned to look at the bannetons i found some bugs in it. gross!! so shall i soak and scrub and sun them. i live in a humid tropical country (manila, philippines) and so i wonder if i will need to be doing this every few uses to prevent the bugs from coming back!

hope you are still checking this page! thank you!

I had this same problem with brown rice flour. But my kitchen can be hot in summer. I’ve washed them thoroughly and I think I’ll keep them in the freezer in summer

I use some olive oil when preparing my dough.  I haven't tried it yet, but I am concerned how much of the oil will be absorbed by the banneton cloth.

How should I clean the cloth, so that the oil won't affect future bread making?

Over the years my cane bannetons have become rough and in places there are little slivers of fibers poking up from the cane.  This is causing the bread dough to stick fast to these and not release easily. Do these baskets need periodic changing for new ones?  How do I clean off old flour while maintaining the smooth cane surfaces?

Is there a particular brand of banneton you would recommend?  I bought a round one off Amazon but it very quickly splintered and has little bits of the cane peeling off/poking out.  It also became infested with itty bitty bugs...not sure if that is from the rice flour I dust it with or what.  I try to keep it clean and dry.....Anyway, any recommendations on brand would be greatly appreciated!

I am concerned the flour left in the cracks would promote bugs seeking out food...ants or roaches. Anyone else have this problem?

Diatomaceous earth can be used to keep bugs away.