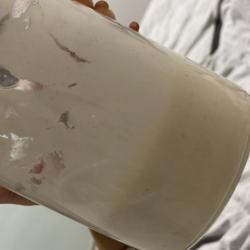 This is day 7 of my starter and notice the white fur and black spots on the top. Can anyone tell me what this is and whether it's normal or if I need to start again. The consistency of the starter is also quite watery. Any help would be appreciated, thanks.

Hard to tell from the photo but you seem to be describing an Aspergillus brasiliensis. Either way you seem to have a nice little mould growing there.

Personally for a starter thats only 7 days I would just toss it, clean everything well and start again. Depending on your risk tolerance you could transfer some of the starter (make sure the part you save isn't near and doesn't touch the mould, also try not to shake it, fungal spores spread easily) and continue with clean equipment but if the mould grew again I would toss as you starter is contaminated. You could probably save it still in that case but for 7 day starter I wouldn't think it was worth it, just cut your loss and start again.

As for the consistency I have no idea I don't have enough experience to help with that.