Gluten free breads based on buckwheat 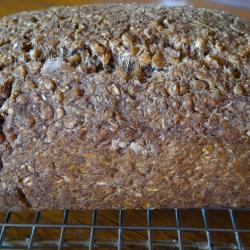 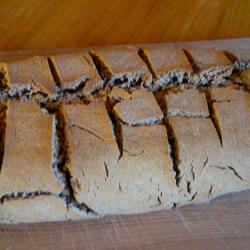 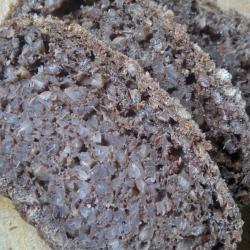 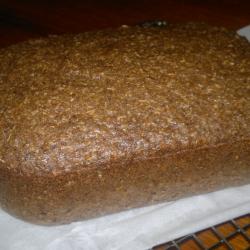 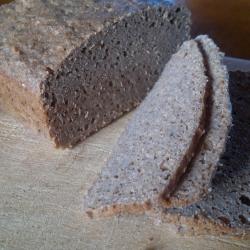 I have been playing around with the idea that it might be possible to develop a gluten free bread with buckwheat only. No additiives, nothing else except water and salt.

The idea first presented itself with my buckwheat starter (100% hydration). After a few months maturing it began to show signs of being a bit "stringy" Not strong strings like a gluten flour provides, but stringy character all the same.

I tried with just buckwheat flour, following one of my long preferment recipes. The result was a rather ugly, but tasty brick!

After a few changes I made this:

When I saw Graham's Pumpernickel  I considered the possibilities, and designed a recipe that followed closely from Graham's.

This is the result:

The crumb was a little on the dry side, and a bit crumbly, could have done with more fines in the cracked seed.

I changed the recipe a little and gave it a longer fermentation. With slightly finer cracked seed and more fines I tried again.

The colour could still be a little darker, the flavour a little stronger, but the latest version is pretty close.

The photos do not show the true colour. It is darker than the picture immediately above.

This 'pumpernickel is about the right moisture level, it can be sliced thinly quite easily. the slices can be bent easily into a 'U' shape without crumbling, or even fracturing. It remains moist (I am writing this on Sunday, I baked the loaf last Thursday.)

This looks amazing! Would you be willing to share the recipe?

Sorry to keep you waiting so long for a response. Most of my work is handled through my blog: www.recipesforliving.info

I have developed 100% buckwheat bread further since this post. I am now able to offer an online tutorial in buckwheat sourdough. If you are interested, please contact me using a contact form on my blog.

I want to learn how to make buckwheat sourdough bread. Thank you