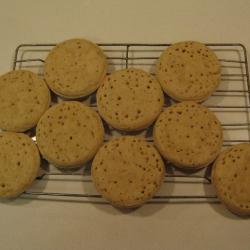 A while back, I was inspired to start making crumpets, partly as a way to be able to feed my starter between loaves and not have to waste the aliquot removed.

I looked at the various recipes around and the majority seemed to add bicarbonate of soda.  Now, not wanting to get into a controversy about 'true' sourdough or 'crap' chemicals, for no particular reason I decided that I would avoid using this ingredient unless it proved impossible to get a decent result any other way.

The following photos show my progress so far.  The first shot is of the first batch that i made.

There are a few things to notice about this batch.  First, they are small.  I was using standard aluminium egg rings.  Second, they get progressively less bubbly.  I put this down to the fact that I prepared the batter in a bowl and used a ladle to dispense into the rings.  This activity had the effect of breaking down and releasing the gas bubbles.

The next shot shows one of my recent efforts.

The larger size is down to buying some 'food rings' from K-Mart located in their outdoors/bar-b-que area.  They are larger diameter (100mm) and deeper (20mm) so are pretty much ideal for the job.  They are also labeled as non-stick but I still take the precaution of giving them a wipe with vegetable oil before I use them.  Absolutely no problems with the batter sticking to the rings.  I subsequently found some actual 'crumpet rings' in a cookware shop, but they were rather more expensive, mainly because they had a folded rim, presumably to facilitate picking them up with tongs to remove them.

The other noteworthy feature is the more uniform bubble distribution since I now prepare the batter in a jug and this seems to be less disruptive of the gas distribution.

I am still experimenting a little with the recipe and that could be contributing the the quality improvement as well - or maybe I'm just getting better at it.

Aha, thanks for the tip!

After slaving away for hours making some aluminium rings from strip, those non-stick ones from KMart sound perfect. Mine stuck like superglue, no matter what I applied to them.

So what's the secret of bubbles without bicarb? Just a healthy starter?

I must confess that I do add a bit of sugar but not sure whether it contributes in other than a minor tempering of the taste.

would supercharge the production of bubbles by speeding up the ferment, so yes, sounds like a good idea.