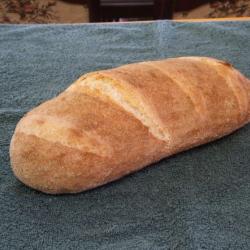 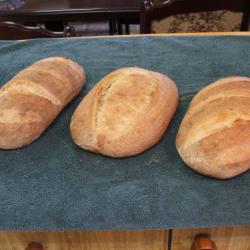 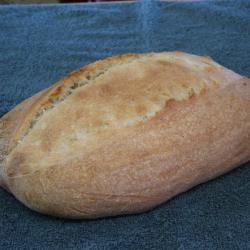 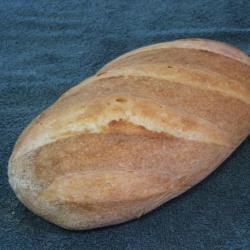 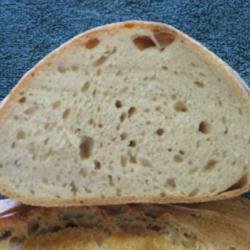 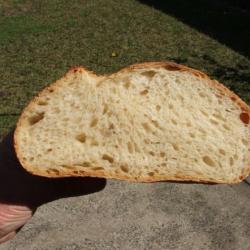 The following is not scientific fact, it is merely my findings from experience.

This bake was done to show what can happen with loaves that are proofed overnight in the fridge, and the effect of different types of slashes in the loaf.

Loaves kept overnight in the fridge have a tendency toward two things, a thick dryish skin (particularly if in a frost free fridge), and the core of the loaf is colder than the surrounding dough. These two factors can have a dramatic effect on your final loaf as you will see following.

1. The colder core of the loaf will cause a tear in the loaf due to the outer section and the drier skin cooking before the core has had time to expand.

2. The type of slash is important in an overnight loaf to controll both the final shape of the loaf and its crumb structure.

The loaves were mixed as a single batch of dough starting at 3PM in the afternoon. They are all white bakers flour at 12.5% protein and the dough is at 64% hydration. At 7.15 PM they were shaped and put in cloth lined bannetons, and placed in the fridge.

At 6AM the following morning the first loaf was taken from the fridge, and the other loaves were taken out at 1 hour intervals (45 min baking time and 15 min oven re-heat time).

Each loaf was allowed to warm up for three hours, which is one hour longer than I usually allow as I wanted to maximise any initial slump but without overproofing.

The oven and baking stone were heated to 210C, and 15 minutes before putting each loaf in to bake the oven was turned up to 230C, and then turned down to 210C after the first 5 minutes of baking. On putting the loaf into the oven, 6 ice cubes were put into a tray in the bottom of the oven, and the top of the loaf was sprayed with water 3 times in the first 5 minutes. Total baking time was 45 minutes.

To show the flexibility of the skin of a one day loaf, which in theory is the same temperature right to the core, I post the following picture. This is made with the same recipe as the others.

As can be seen there is no tearing and a good shape.

The following pic shows the overnight loaf with the traditional “Vienna ” style of slash, you will note the tear and the rounded profile caused by the cooked bands of crust holding the loaf tightly. The loaf has not expanded to its full potential as you will see from the crumb pic shown later.

The next pic shows a slashing half way between the previous two, it has allowed some spread and opening up of the crumb, there is still a small tear but it has also held a better shape.

A good comparison of the three loaves can be seen following. The centreline slash has allowed a wide spread which actually shortened the loaf.

You can see the difference in the crumb structure in the following two pics. The first is the tightish crumb which has not been allowed to expand in the “Vienna” style slash and tight crust. The second is the more open crumb of the centreline type of slash.

As you can see, the type of slash you put in your overnight loaves can indeed affect the final result, both in shape and crumb structure.

Thanks for the photos and detail. I've only recently started making my own sourdough bread. Do you have a link to, or could you post the full recipe please? Only after 15 loaves or so, am I starting to get good vertical development in my un-tinned loaves.

The last photo in particular looks like what I'd call a perfect loaf!

I never proofed my bread over night, but this looks wanderfull, I wander if it would be the same in a WFO.

I almost always retard my dough in the fridge overnight after bulk proofing, shaping and a shortened final proofing (the rest of the final proofing takes place in the fridge, slowly, which generally develops the flavours a little more). I bake straight out of the fridge next day. Not only is the dough easier to manage and slash, but I find the flavour really is enhanced. Also, depending on the type of dough, the overnight fridge retardation produces some nice blistering of the crust during the bake.

I can't imagine why overnight retardation wouldn't work as well in a WFO, Dimitry. Only thing is, you bake quite a few loaves per session I think? Unless you have a large (or spare extra) fridge, maybe the overnight storage would be a challenge?

I'm thinking it's just a matter of sufficient time out of the fridge to get the same degree of proofing, moreso than the slahing pattern, although I agree the slashing pattern affects the loaf pread. If you take two identical loaves out of oval banettons and bake them side by side in a 900 mm wide oven, and you slash one at an angle that is mostly lengthwise (slashes mainly along the long axis of the loaf, it will spread out and and lay a little flat, because you have cut through the skin which otherwise would maintain some degree of hoop tension. So you get a wider flatter loaf. If you slash short slashes across the loaf, you keep the hoop tenison around the loaf and so get a higher loaf, which also extends out longer because that's the direction in which you have relieved the skin tension (along the long axis of the loaf). This is good for toasting in a single-slice toaster.