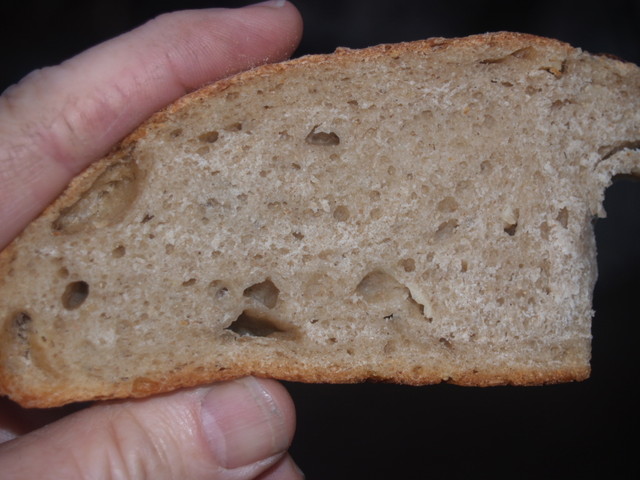 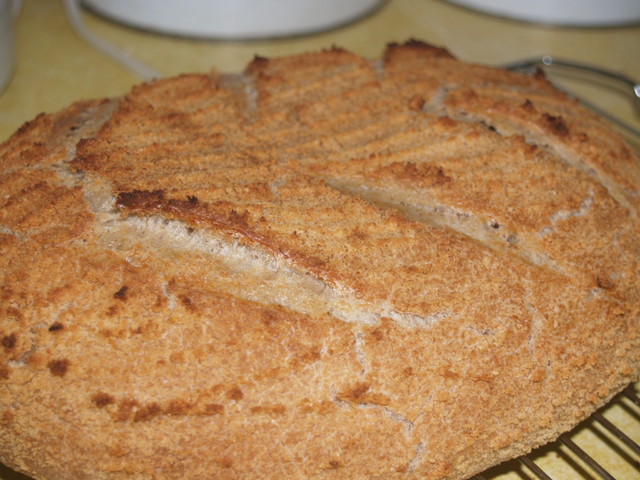 One of the winemakers at work suggested that I make a bread with garlic in it and I though that this was an excellent idea.

The loaf on the left (main photo) had the banneton coated with very fine almond meal.  The one on the right I use rice flour.  I really like the golden color of the one on the left.  That is the loaf we are going to have for Thanksgiving and I'm interested in tasting the roasted almond meal crust.

The preferment is a little different than I have done in the past.  I use 2 grams of my 50% hydration storage starter and added 60 grams of flour and water to it.  The flour in the starter is the same blend of flours that I have in the bread.  I let the starter ferment for 12 hours before I use it.  The garlic was roasted at the same time as the preferment was started.  I took a clove of garlic and cut the top tip of it off.  Then I cooked it in the oven at 350°F for 40 minutes.  It had a little olive oil poured over it and covered in foil while it cooked.  The next day I pealed the sections and then smashed them on the cutting board with my cleaver.

The dough was made by mixing the preferment, water, and flour together into a shaggy mass.  This was let rest for 30 minutes.  Then I added the oil, salt, and garlic.  The dough was then mixed until the gluten was developed.  I then turned the dough out into an oiled bowl and did a few stretch and folds every now and then. The dough was shaped and put into a banneton after a couple of hours.  When it passed my poke test I cooked it at 460°F for 45 minutes.  The first 30 minutes of the bake the dough is covered with a roasting pan.

The bread turned out great.  There is a lot of aromatic character to this bread but it isn't overpowering.  The bread is very flavorful but the garlic flavor doesn't knock you down.  Lots of people at work really liked it and even said so the next day so I'm thinking it is a good bread to make every now and then.

I also have been experimenting with my new starter and making a few tweaks to it here and there.  I really like how it has been performing so far but want to see how far I can push the flavors with it.  Hopefully by Christmas it will be making some wonderful bread.  I love how open the crumb has been on the loaves I have made with it.

The one coated with fine almond meal has a nice yummy toasted look to it.  I'm looking forward to cutting into it.

Looks fabulous LD!  I was thinking of adding caramelised onions to my next pain de fantaisie so am glad to hear the garlic didn't over power the bread - so did you use one full garlic bulb for two loaves?  No forget it, I see you used 22g for a loaf.

Also the almond meal sounds like wonderful thing to dust the banneton with - I can't even imagine how great that would taste (and smell)!

Yes karnie you see how much I used in the first loaf.  The second loaf came up a gram or two short of what I put in the first and I chopped it up just to see what difference it made.  The bakers percentage that I used was 3.5%.

The head of winemaking suggested that olives would be good in a loaf of bread.  I love it when they give me ideas of what they want me to make for them.  You will let us know how the caramelized onions turn out won't you?

Will do LD.  Olives was also on my list - so this weekend's line includes caramalised onion, a spiced fruit/nut and maybe even an olive version of my pain de levain.  Better go and wake sleepy starter up and get him ready for his big weekend!

Yes tell your sleepy starter its time to get to work.  I have been enjoying your recent postings about baking from "Local Breads".  The fantasy breads are always things to try out.  I have a lot of the new wave grains here that I mill for the flour.  Some of the flours are flops but some make really good bread.  I just enjoy discovering and exploring these new and different combinations.  The almond meal on the 2nd loaf added some flavor to the loaf but wasn't as great as I expected.  Olives are up next at 25% of the flour.  Yum!

Yes I have always envied you and your home milled grains!  I have a couple of "new wave" flours - spelt, buckwheat, besam (chickpea - haven't used this yet, given to me by a friend), but have only used them a few times as would quite like to become adept at wheat and rye first (have about 5 different grades of rye).  I think I should go back in Local Breads and make the spelt and buckwheat again, as I liked them, but they didn't turn out brilliantly.  All the more reason to do them again I guess.  ok then, next weekend I'll do just that, this weekend is already busy enough.

Have just gotten home and have autolysed my flour (fed the beasts this morning), due to add starter about 10.30pm, which is now  .  So will go make my dough and put it in the fridge to ferment overnight.  Looking forward to caramelising those onions tomorrow!  Should make a whole lot of them and do onion jam while I'm at it.

Your garlic bread looks wonderful, sounds wonderful. Did the dough absorb much of the almond meal?

Thanks for the info that the starter flour wt. is not taken into consideration for the salt amt.  Or at least that is what I think I understand. I think I will try your formula it's well laid out and seems easy.

I gave this a try last night and after three stretch and folds over the course of 2.5 hours I turned the dough out onto the counter to form into a ball with the intent of letting it rest for fifteen minutes befor putting it into my banneton. The dough was wetter and sticker than I'm used to and didn't seem to want to hold it's shape much at all. I went ahead and put it in the fridge for the night and will cook it in a couple more hours. I'll let you know how it turns out. Did you notice any difference working the dough after adding the garlic than you do otherwise with garlic free dough? -- James

No I didn't think it was any wetter than any other bread I have made at this hydration.  The whole wheat, rye, and barley flours were home milled.  This might be the difference as they will absorb more water than store bought flours.  I don't think that it would be uncommon for the first time a person tries a new recipe that the hydration would need to be adjusted the next time that bread is baked.  I take it as part of what I have to do to bake new breads.

It's baking right now. :). Had me worried at first as it spread quite a bit, but the slashes opened up nicely and it has pretty good spring. Beautiful golden crust too. But the smell! Man is that wonderful!

Just pulled it out of the oven.

Can't cut into it till later tonight so I'll just have to wait to see the crumb, but I bet it is nice and open.  Thanks again for the formula!

I can't wait to hear the crumb report.  That is a nice looking loaf of bread.

Wow! Great flavor, springy texture and very open crumb. It received raves and great praise from everyone who ate it. The garlic wasn't overpowering, but instead added just the right amount of flavor and aroma. We were at a New Years dinner / party so I missed out on a photo of it, and now there is none left (it didn't last long)! I'm prepping my starter to make another one tonight. You my friend, are a genius! Thanks again!!! --- James

Well Jigsaw I'm glad it turned out great.  I don't think I'll take credit for being the genius for this bread idea, it was the head of winemaking from work.

I baked a loaf today for a Yew Years dinner/party and the last time I did that it didn't last very long either.  I find it interesting that a food as simple as bread can be such a big hit at a dinner party.

I just looked at the blend of flours that I have in this bread and that is my favorite blend of flours.  I do like what each flour does for the bread.  The blend came about by doing trial and error loaves until I got it just the way I like it.