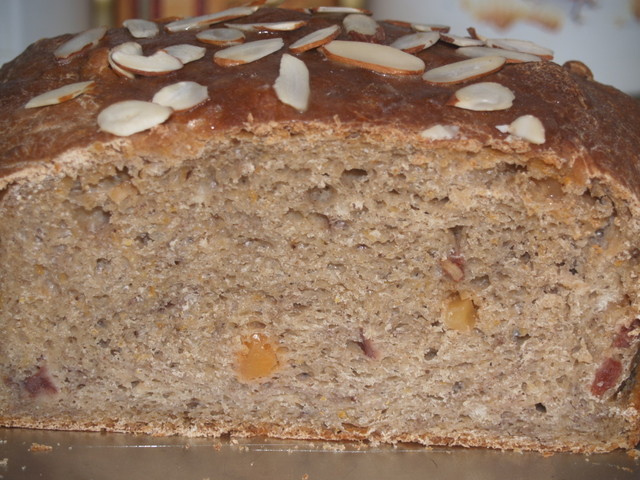 When I saw that Reinhart thought Stollen and Panettone were very similar breads just different shapes I figured I was ready to give it a try.  I have had Panetonne a couple of times so I know what it is supposed to be like.  When just eating a lose crumb of this bread made me want to eat more then I knew what I had made was very good.

Next time I'm going to get a Panettone mold to make the bread.

I was brainstorming as what kind of dough I wanted to use to make this bread and thought I would just increase the hydration of my Stollen bread.  I was a little bit over zealous in my estimation of the hydration and had to add flour to the mix.  This is still a very wet dough but some stretches made it so I could manage it.

The preferment is 100% hydration and made in two builds. When I started making the preferment I took 105 grams of dried fruit and covered it with Brandy.  The dried fruit soaked for a whole day.  I used cranberries, pineapple, and papaya.  The day of making the dough I add all of the preferment and flour to the milk that has been warmed up and I mixed this up into a shaggy mass and let it sit for an hour.  While the dough was sitting I drained the dried fruit and kept the Brandy for my glaze.  The Orange and Lemon zest was made from one fruit each.  Then I started mixing the dough until it had come together to form a nice dough.  When it had done that I started adding in the rest of the ingredients.  I let this start fermenting about an hour and a half then I stuck it into the refrigerator for an over night cool down.  The stretches were done to the dough after it was in the refrigerator.

The next day I took it out of the fridge and formed it into a ball and carefully placed it into my homemade mold. The mold failed during cooking so next time I'm getting a real mold.  I set the dough on top the the refrigerator and added some wood to the fireplace to raise the temperature in the house.  The dough started to rise after about three hours so I figured it was ready to cook.  The cooking time was based on what Rienhart said for his formula and it turned out perfect.  The crumb wasn't a bit doughy but nice and moist.  I preheated the oven to 325°F and then cooked the Panettone for an hour and a half.  I was disappointed that the mold failed but from the one side it looks fine and tastes great.  I didn't need to hang my Panetonne upside down when it was done like I had seen done for other Panettones.

The next day I made the glaze and poured it over the top of the Panettone.  The glaze was made by melting a thick slice of butter.  Then added a half tablespoon of the brandy from the dried fruit, an eighth of a teaspoon of Vanilla and Almond extract each.  The glaze is then thickened up by adding powdered sugar until I got the thickness that I wanted.  This glaze is just very wonderful all on its own.  I placed some sliced Almonds on top of the glaze and wrapped a ribbon around it to finish it off.  Here is a picture of the crumb.

This looks so good, I have to try this.  But, I am confused on 1 item.  You listed "3 g Nutmeg, Cardamon, Cloves, Cinnamon". I'm guessing this 3g measurement is to include all 4 spices.  Not each one at 3g for a total of 12g.  Thanks for replying.  Merry Christmas.