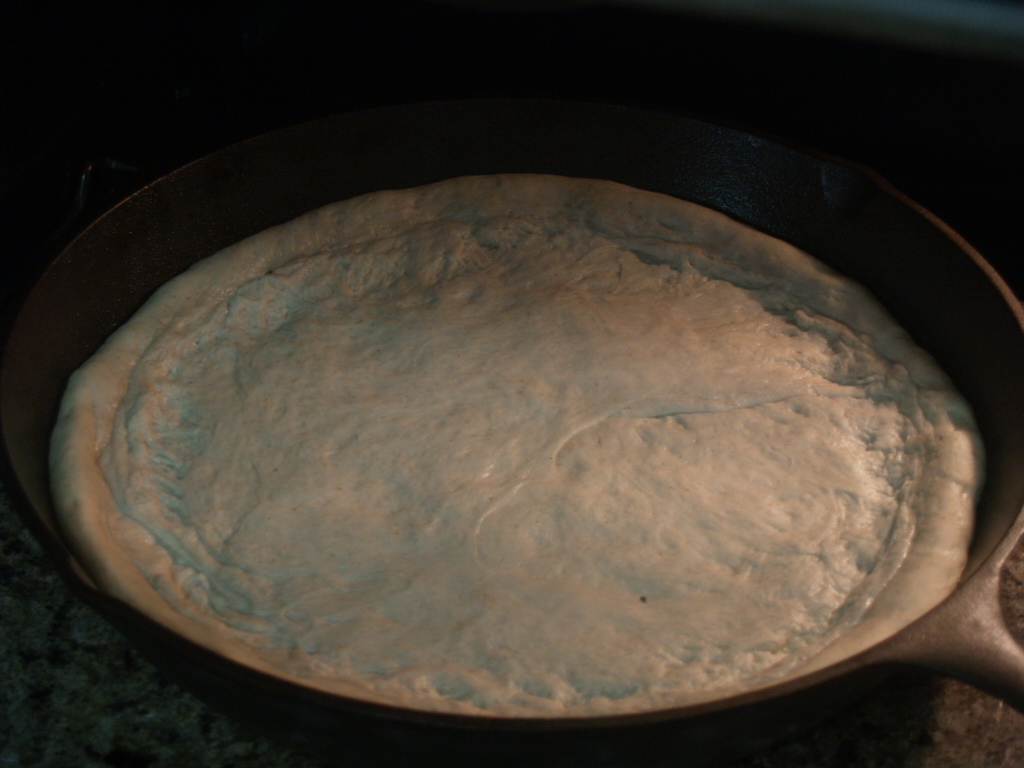 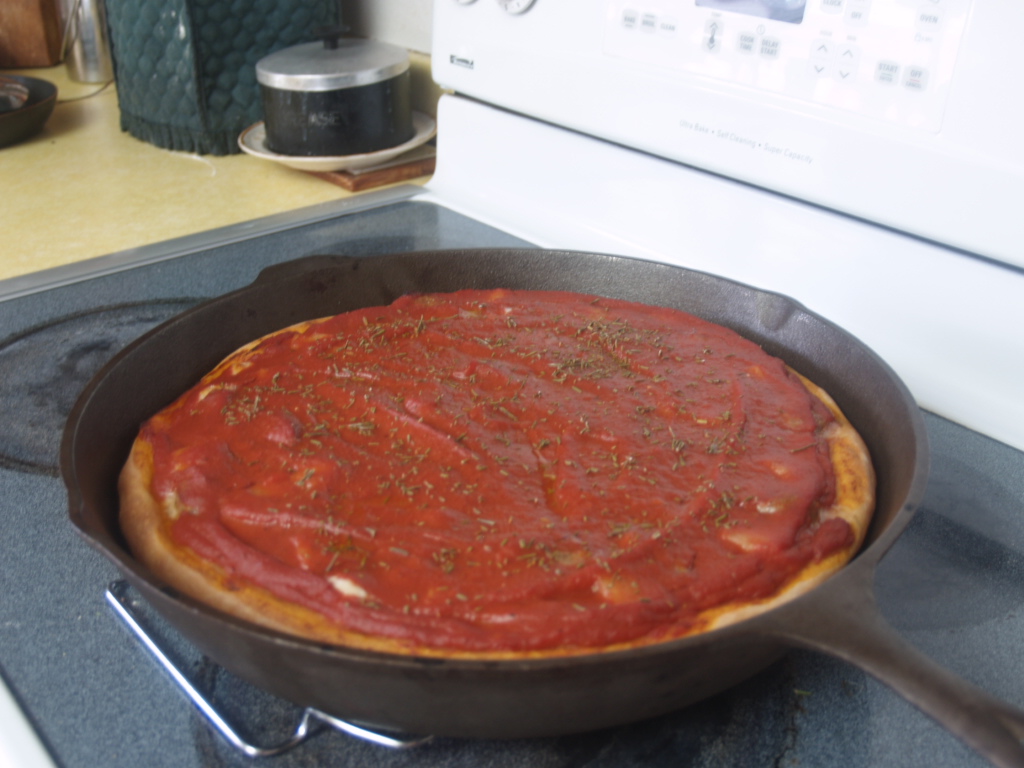 A large deep dish pizza made in a cast iron frying pan.

I start the preferemnet 24 hours before I want to make the dough.  Make 601 grams of preferment at 175% hydration.  The next day I add the flour and salt to the preferment.  This is placed in a covered bowl and allowed to proof.  When it has proofed long enough the dough is placed into the refridgerator to be used within a few days.  The dough ball is placed in the middle of a 15" oiled cast iron frying pan.  I just then start flattening the dough out to the edge and up the sides of the frying pan.  I turn the oven on to 500°F when I start to make the pizza.  The oven is ready when I get the pizza all made up and ready to cook.

The bottom of the pizza is lined with 1/2 pound of Mozzarella Cheese.  The next layer is 1 pound of Italian Sausage.  The 20 oz of pineapple is drained and the chunks are placed in between the sausage.  The pizza sauce is poured all over the top so that it covers the pineapple and sausage.  I chop up some fresh Rosemary and sprinkle it all over the top the amount isn't measured.  Olive oil can be sprinkled over the top of this but is optional.  When I take the pizza from the oven I sprinkle some Parmesan Cheese on the top of it.  I cook the pizza for 45 minutes at 500°.  One slice of the pizza is very filling.  I think this is the best and easiest pizza I have ever made.  You can use what ever your favorite pizza ingredients instead of what I used.  I keep forgetting to add a little corn meal into the dough but you can use this dough as a starting point.  The cast iron frying pan make this all really easy to do.

The crust is nice and crispy and not limp.  You can pick up a slice and eat it.  You might like to use a knife and fork as eating it by hand is a little bit messy.

Am I the first to be brave enough to comment on this?

OK, so someone is pulling my chain, right? I have just stumbled on this web site and was finding things very interesting until I chanced upon this three kilo monstrosity.

To describe this abomination as a pizza is a travesty. Could I take a guess that from the imperial amounts given, this is post is proof there is an American on planet Earth with a sense of humour, and that thisparticular joker is having a lend of us all? .

A pizza is a work of art; it is a delicacy put together with love and care. This on the other hand look like it was constructed with the aid of a cement mixer and a bricklayer's trowel.

Please take it down, there is no room for this on a serious site like this, What the hell!

Gosh.  I just posted a really, really long comment on someone's blog that purported to disclose a "sourdough" recipe.  The blogger repeatedly asserted that the yeast would "create" the gluten during the resting phase.  This -- and other bits of pseudoscience and fantasy in the recipe -- irritated me so much that I spent half a day composing a comment explaining what gluten is (based on descriptions that protein crystallographers have given me); how yeast metablism works (I'm married to a yeast geneticist); and how the development of gluten is intermittently couteracted (not created) by the operation of the yeast.

I realize now that I hurt her feelings.  I thought she needed to be schooled but why?  What if people really like her recipe?

So what if there are people out there who really love a thick, heavy, ooey-gooey deep dish pizza?  I'm a thin-crust gal myself, but maybe this recipe will make a lot of people happy when they try it and it works for them.

Lets see how a personal pizza works for ya!

Deep dish pizza is a Chicago style pizza. It's delicious. It's pizza. It is obviously quite different from "traditional" pizza (at this point in history I don't see how any pizza is traditional), and there is a lot of debate between Chicagoans and New Yorkers about whose pizza is better. I love both, personally.

Thank you for such an awesome pie. I will have to give it a try. I don't understand the part of "Make 601 grams of preferment at 175% hydration." I'm kind of new at this. If you could point me in the right direction that would be great. Also I read that if you use a cast iron pan you need to heat the pan for 4 - 6 minutes after building the pie or preheat the empty pan in the oven. Is this necessary? A cold cast iron pan takes awhile to heat up. Thank you.

Hydration of a mixture is just the ratio of liquid (water) to flour expressed as a percentage.  So, at 175% hydration, for every 100g of flour there would be 175 grams of liquid.

The number 601 is probably the result of conversion from Imperial/American measures so rounding to 600 means that this mix would contain 220g of flour and 320g of water.  Normally, in preparing a preferment/levain, you would take an amount of your stock starter and mix it with fresh flour and water and leave it for a time to get nice and active before making your dough.

I think Leaddog's general approach is that he takes only a spoonful of his stock and makes these large, high hydration levains so in that case the amount in the stock portion is quite small and you could leave them out of the calculation and just use the bare numbers above.

As far a the need for pre-heating the pan, I think the fact that the baking time is 45 minutes, the few minutes for the pan to heat would not matter at all and it would certainly be a lot safer than trying to work in and around a red hot pan.

As an aside, I sort of agree with an earlier comment that this isn't really a 'pizza' but rather an open layered pie.  Still, as long as it tastes good and fills an empty spot, what's in a name?

I grew up near Chicago, IL, USA and Deep Dish Pizza. This recipe looks amazing and I can't wait to try it! Thin pizza may be more traditional but even the thin stuff we eat here in the USA isn't really pizza. Thanks for the recipe!

I have noticed over the years that people can be very passionate about pizza and how it should be.  I have seen some people say the only true pizza is a Neapolitan.  When you check with Wikipedia you will find a very legal definition that many pizza places can't follow.  Now there are many variations of pizza around the world that have become famous because of their location or style.  Chicago happens to be famous for a deep dish pizza and that is the style this pizza copies.  https://en.wikipedia.org/wiki/Chicago-style_pizza

Hello, thanks for the recipy. We just ate two loads of your ethiopean flatbread and it was awesome. I understand that the injera is also 175% hydration? I just took the leftover batter and made this pizza dough. I am from Czech Republic and our pizzas ressemble much the deep-dish Chicago style. We make them on a lage rectangular plate like our cakes. Can't wait for the results. Miamm

For the thin crust lovers : I understant you but don't have the energy to fight half an hour with a dough...

Im a thin cruster from way back but each to their own.

The childhood memory of particualr tastes are strong and should not be denied.