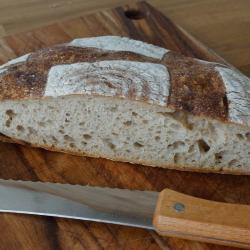 After many failed attempts, I think I'm finally on the way to making good bread. I am very grateful for all the great advice I received here. These two loaves weren't perfect but texture and taste were very good. I need to work on my shaping skills. I think poor shaping is the cause of huge bubbles inside around the crust. I don't particularly mind them, it's more of a cosmetic issue for me.

I tried many different recipes and nothing really worked for me. I made up the quantities for these two loaves and they turned out pretty well.  I also had to go through many overproofed and underproofed loaves before I realized using other people's timing just doesn't work for me, it is far more important to look at the dough than the watch.

Both of these loaves were made by autolysing everything except salt for 30 minutes. Then I added the salt and kneaded in a stand mixer on speed 2 until I could feel some gluten development. Again, I stopped looking at recipes for the times and instead tried to decide by feeling the dough (it took 5 minutes for the first one, about 8 minutes for the second one). Then I let if proof at about 18°C for 5 hours and folded twice during that time.  I left the dough in a banneton in the fridge overnight, then let it sit at room temperature for 1 hour while I preheated the oven. Baked on a kiln shelf at 250°C for the first 5 minutes, then lowered to 220°C for the rest of the bake. Instead of steaming the oven, I covered the the loaves with a deep roasting tray for the first 20 minutes, then baked another 20 minutes uncovered.  This seems to me to be a much better method that creating steam in the oven, which I was never really comfortable with.

There are too many variables to make good bread just using a clock.

225 ml of water would give a stiffer dough that should be easier to work with.

The gluten is easier to develop with a stiffer dough.

The window pane test is a good method to gauge gluten development.

You don't need the gluten fully developed but you do need some development.

Congratulations, your on your way to creating great bread.  :)  I think much of the process is about hands on experience and understand what we see and do during the process.  So much to learn!

Petanque, these two loaves were a clear proof of what you're saying about stiffer dough.
The second dough (without whole wheat flour) was a lot wetter and therefore took a lot more kneading to get some gluten development. The loaf also ended a lot flatter but I preferred this one taste-wise and it also lasted better.
Although a drier dough would be easier to work with I don't think it would result in better bread. Very wet dough is probably harder to work with if you do all your kneading by hand. I am comfortable using my mixer now because I know what to expect from the dough. I know why people prefer hand kneading but having a machine that can do the work is great :)

I have been trying now for nearly a year. Once I made two superb loaves and now cannot repeat them. It is at least humbling for me as I think I can cook anything. Met my match!! I have a wood fired oven made by my husband after the two successes, best flour, rain water, natural salt and two starters. My starters look like the ones on this site and I feed them every day. The chooks eat the throw out starter then they eat the failed loaf. My loaves cannot make it into the oven, they collapse or they are sloppy and too sticky to handle. Then they are just a brick. I have done enough reading on the internet for a PHD, purchased books and then attended another work shop. I think that I am over proving or maybe my starters are not mature. They are six months old now and foamy. So, I will try again after consulting your blogs. Just please don't load up anymore "my first, or second loaves" they make me too angry. Actually they make me try harder.

It can be frustrating, I know, but believe me you will crack it in the end.  It sounds from what you say that you are over-proving your loaf.  I would think seriously about shortening the time frame for all stages significantly to see what happens.  Without numbers it is hard to say exactly how much.

Although not the only way or perfect by any means, this blog of mine will give you a look at something that worked.

One of the main things that you have to realise is that you should listen to the dough and not just blindly follow the time-lines given in a lot of descriptions.  How the dough reacts and performs depends on a lot of variables to some degree but the most significant of all is temperature and very few recipes give you the temperature details.  So if your environment is warmer or cooler than that for the writer of the recipe then the timing will have to be adjusted accordingly and reacting to the dough rather than the clock is a far far better way to go.

Another factor is the flour as wheat flour and rye flour are vastly different in their response and handling qualities.

Let us know how you go and good luck with your projects.