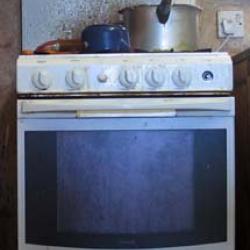 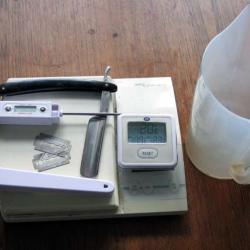 You asked for photos, you shall have photos. First, have a browse through my snaps which I keep on photobucket:

I get nice compliments about my photos but the only secrets are: use a tripod; use natural light; try a few different angles. The reason for showing my photos is not (only) to get more nice compliments but to get you to consider the specialist equipment used to achieve these breads.

You see this dirty, broken down gas cooker with one knob missing, the oven seals gone, the light blown out, the temperatures worn off the oven control. That's what all those breads were baked in so don't blame your oven for your next failure.

You see this highly technical equipment and the bits I forgot first time round below. That's pretty well my whole batterie de cuisine accumulated over a 14 year period and quite a bit of it doesn't get used.

So to produce good bread you don't need expensive and sophisticated equipment. I have got a mixer but I haven't used it since I did a Dan Lepard class last October. I think the only things missing are a bunch of tea towels for lining baskets but they also have to earn their living drying dishes. Plus, as Bill44 recently pointed out, a good bread knife.

Clockwise from bottom left:
Dough scraper (bench knife) the most useful tool in the list, use to free your dough from the bench when it sticks, to help you kneed wet doughs, to scrape the dough off your hands.
Cheap wallpaper brush for brushing up flour.
A variety of bread tins and baking sheets I very rarely use the tins and I've given up with baguette tins. It is worth investing in good quality, heavy duty baking sheets. You don't need to flour or grease them and they last for ever. I've given up on baking stones and spraying the oven, didn't seem to make a blind bit of difference.
A variety of baskets for proving: yes, I did by a couple of lined, oval bannetons in Paris, but for the most part I use really cheap baskets, which came from a florists suppliers, lined with tea towels.
A variety of mixing bowls and pudding basins with lids (or cling film): for mixing doughs and storing starters.

In the second picture:
The odd pastry brush: for glazes
Safety razor blades: for slashing dough. I've been experimenting with the cut-throat razor but razor blades are best. Having said that, I've just inherited a small cut-throat which used to belong to my father in law and it's quite good on baguettes.
A probe thermometer: hardly ever use it.
A max/min thermometer: lives on the kitchen wall. I don't use it in any scientific sense but it does give a useful indication of background temperature.
A jug: for pouring not measuring.
Digital scales: you can't be serious about bread making and communicate with other bakers without weighing and weighing in grams.

The other vital bit of equipment is an A4, hardback notebook and a pencil with an eraser. Every time you bake record what you do and date it. You think you will remember but you won?t.

Hi Mick, up to a point I agree with you about baking stones in a gas oven, however in an electric oven with the element at the bottom, a stone stops the vicious radiant heat from burning the bottom of the loaf. It also helps to maintain a more even heat during the on/off cycles of the element.

I totally concur with your statement to the effect that high quality bread can be made with basic equipment. My mixing bowl for a 3 or four loaf batch is a 10L plastic dish, $3.50 at Coles.

I'm sure you're right. You might get better results in an electric oven using a baking stone (and introducing steam for that matter). I just don't have any experience of using electric.

[quote="bethesdabakers"]
You asked for photos, you shall have photos. First, have a browse through my snaps which I keep on photobucket:

I get nice compliments about my photos but the only secrets are: use a tripod; use natural light; try a few different angles.

Oooo....tks for posting your pix link. Gorgeous breads; that was really a treat! I absolutely agree with you on using a tripod and natural lighting as far as possible. Best of all, we got to see a caricature of you. The artist captured YOU exactly (I love all the details/expression)...not that I've seen you wearing only a Gay Paree-inspired apron and nothing else....

p/s You don't look at all like what I had in mind....somehow, always thought you had light brown hair.

Coming from you that is serious flattery. Every time I feel envious of your photos I say to myself, the light must be much better where you are!

I'm afraid the caricature of me is all too accurate. A friend of mine was much amused to hear that I was making my own bread on holiday in France so she did a picture of my partner, Sue, sunbathing on the balcony while I sweated inside.

Mick you are so high tech! I love it! I am definitely not going out to make any expensive bread-making poser purchases ... just want to eat the good stuff!

The photos are wonderful, and the breads look fabulous.

Yeah, I'm a tasty old geezer - took me years to collect all those Christmas pudding bowls.

If you want to buy the latest, matching kitchen equipment that's fine. I'm just trying to make the point that you don't [i]need[/i] it and you are missing the point if you think that you must have the finest hand-made, linen lined, cane bannetons to produce good bread.

Same applies to those people who think that their bread failed because they didn't have that few grams of 00 flour or the right brand of Italian sparkling mineral water.

I know that people panic when they first start out making bread - it feels so awkward and, good grief, the dough is sticky. But normally good cooks suddenly lose their judgement. The number of times I've seen people ask for advice because their bread is burning on the outside before it is cooked on the inside whereas if they were cooking a rice pudding they would just turn the heat down.

Once you have seen a tray of baguettes slide gracefully onto the kitchen floor just before baking a couple of times and had to pick out the black bits and reform the dough as a boule pretending nothing has happened you start to relax a little.

....or you use the wrong flour on your bread cloth and as you turn it out it doesn't want to play, so that loaf becomes an instant Focaccia.

Foccacia is good, too!

I have the 'appearances' argument with a friend of mine on a regular basis ... at the moment it's because he wants to buy a big, expensive (ostentatious) house. A 'show' home. I think he's a wanker and that there are better things to spend your bucks on. But he and his wife think that a showy house is what matters. That said, I think he's quietly envious of our little three bedroom (just!) house without an inch to spare ... that just happens to be 50 metres from the edge of a lovely lake with coffee shops and cafes, etc, 100 metres in the other direction!

I think I prefer mine.

My aim is to learn how to make good, reliable, healthy, tasty bread.

And I do enjoy it a lot!