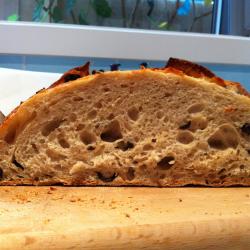 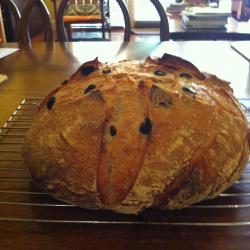 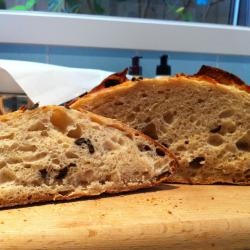 It's been a long time since I baked any sourdough worth mentioning.  My starter had been at the back of the fridge for several months and I finally got around to refershing it last week.  When I took it out it had a liquid on top and had gone grey.  After throwing away most of it and starting again in a new jar, 2 refreshes and it was ready to go.

With my new starter I made a batch of sourdough ciabatta rolls and an experiment of olive and parmesan.  Below is the quantities of my dough and the timing.

I started by mixing the starter, water, flour and salt and letting rest for 30min.  Quick 5min knead and then rest for 45min.  I did 3 sets of folding at 45 min intervals with the final fold being used to shape the dough.  It was also at this time that I stretched the dough into a rectangle and placed the olives and grated parmesan on top before doing the fold.

I then place the dough in a round banneton and placed it in the fridge overnight (about 8-9 hours).  In the morning I took it out and let it come back to room temperature for about 2 hours.

Once it has returned to room temperature I slashed the top (very exciting as I didn't drag the lame for the first time and there were bubbles under the surface!!).  I place it in a 240 degree over on a pizza stone covered with a stainless steel bowl for 15min.  After that I turned it the oven down to 220 degrees for a further 20min.

When I opended the oven and uncovered the bread it was very exiting to see that it had risen and the slashes had worked.  It was still a bit light in colour at this point so I left it uncovered for a further 10min.

After all this I think I ended up getting only 2 slices as the in-laws and my 6 year old daughter ate the rest.

Here are the picture.

Well Cam that bread looks and sounds just delicious! I made some bread rolls with olives in a while back, but the addition of Parmesan sounds very tasty!

Isn't it great how resilient our starters are?