New to all this. 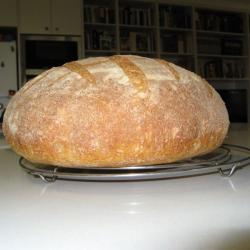 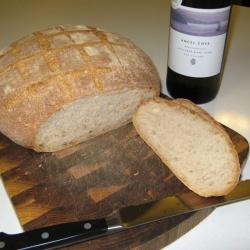 I've been baking bread for some time and had a good sourdough starter some time back but circumstances that i don't actually recall caused me to give up on it and to revert to yeasted bread.  However, the urge recently came upon me to go back to sourdough and I stumbled upon this site and its veritable mine of information and inspiration.

So just over a week ago I started an new starter using SourDom's beginners guide and lo and behold after very few days it seemed to be working just nicely thank you very much.  Just had it in a glass jar sitting on the kitchen bench with the lid sitting on top.

After religiously discarding each day for six days, on the seventh I decided that it was time to give it a try - nothing ventured, nothing gained! The series above shows the development on the following day.

Figuring that I was onto a good thing by following SourDom I picked on his Pane Francese recipe and followed his Basic Timing Schedule.  I also used the minimum kneading and stretch and fold technique.  This is quite a change from my normal method which is generally the 'french' vigourous approach or, if I am feeling a bit lazy, the Kitchenaid and dough-hook.

After the final folding, the dough was shaped and placed on a rye flour dredged tea-towel and placed in a colander (don't have a banneton at this stage), covered with a damp cloth and left to rise, which it did beautifully.  After rising, a circle of baking paper over the colander and inverted.  Removed colander and cloth.  Slashed the top and left for five minutes to relax and then into 220C oven (top and bottom heat) with terracotta tile.  After 15 minutes, removed baking paper and reduced temp to 200C.  After another 15 minutes reduced temp to 180C.  After another 10 minutes, oven off and door ajar for 5 minutes.

I can tell you I was pretty pleased with the result and could barely restrain myself from hoeing in right away.  However, I did manage to wait for an appropriate cooling interval (actually until evening meal time) before making the first cut.

I have to say that I am pretty well pleased with the result.  The texture is good and nicely chewy.  Only the slightest hint of sourness though behind an overall sweetness that seems a bit surprising.  Maybe it's because the starter is so young.

Perhaps next time I will try some steam in the oven or the inverted bowl.  I know that used to work a treat with my previous sourdough efforts - the crust crackle used to be quite fantastic.

Steaming during that initial 15 minutes period should put your crust up a notch again - or, as you say, baking under an inverted bowl. But I don't reckon it gets much better than this one, going by the pic. And the good news is, there are countless variations to try!

I've got this feeling you won't be looking back from this point. Welcome to the sourdough tribe!

This is such a great resource that you are providing and you give it away for free. I love seeing websites that understand the value of providing a quality resource for free.

Wonderful starter, photos and the bread, wow!!! So how do you enhance the starters readiness to bake? Does the term starter at 100% hydration mean straight from the jar, thick and bubbly? I haven't purchased any bread books yet so I'm solely going on what I've seen and read here, recipes I've collected and my heart!! Just wanting to bake real bread for the little people in my life so they don't eat cake anymore!!!!  Crystalmama

Basically the starter sat on the kitchen bench overnight and while still holding some bubbles it had deflated quite a lot from where it was in the photo.  In the morning, rather than discard the bulk of the starter the required amount (180 gms) was weighed into a bowl followed by the water and mixed into a liquid slurry.  What was left in the bottle was fed up again with the 100g flour and 100g water. Then the flour(s) and salt were weighed into the bowl with the starter slurry.  The dough was mixed and kneaded and stretched following the schedule in Sourdom's various blogs.

I guess you could use the starter at any phase in its cycle because the activity starts again whenever it gets a new lot of food (as in the new flour in the make-up of the dough).  The main criterion seems to be that as long as the starter has been active and is at least doubling in size and doesn't smell really 'off'.

As I said before, give it a go - nothing ventured, nothing gained - and little lost other than a little flour.  And from what I have read, even the 'dud' loaves taste OK /;-{)}

Yes third time and have been extending my prooving time from 21/2 hrs to >6hrs and we'll see tonight when baked at 220celcius for 20mins or more, how much kneading? That sounds an individual thing! Yeah it's all about learning and flours cheap, well actually the people had underpriced my bags, so my breads really cheap to make!!!!

If you do a search and find SourDoms beginners blogs on this site he gives a very good description and photos of kneading and pre-ferment techniques.  Of course there are no hard and fast rules - do what works for you- but a helping hand is a good start.

Regards and hope the loaves come out well.  I'm planning another run tomorrow.

Thanks for your support and I'm pleased to say, my 2 quaint white loaves are resting quietly in their brownpaper sleeping bags!!!!!!!! Golden thin crust and soft spongy middle, yes I had a taste, we're impressed and can't wait to eat some tomorrow, don't you just love sourdough!! Crystalmama

bubbles, smells like "sour",  deflated, BUT never actually doubled or even tripled

can I still use it to bake the sourdough bread?  I'm assuming that it will not be

as light because it did not rise sufficiently or at all. Testing it out.

What do you think?