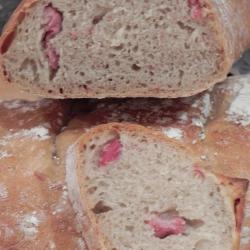 Well I clearly haven't had much spare time in front of my computer for the last 6 months as I made the Rosetta rolls and Green Olive Sticks from Daniel Leader's "Local Breads" in about June and still haven't written about either of them! The even stinker thing is I don't appear to have taken any photos, and have written very poor notes, so must confess can't remember what they were like - hopeless! So maybe I'll just have to make them again, and post when I make them instead of half a year down the track!

The next bread on my adventure through this book is Pane con proscuitto which I have written notes about and even remembered to take photos of, so I'll tell you about this bread instead! This recipe is about half way through the Italian section of this book, and as I have confessed before I'm not entirely loving the Italian breads. Perhaps this is one of the reasons that I have been slack with my blogging about my journey through this particular section of the book?

Anyway, as with the other Italian loaves, the recipe also calls for a yeasted ‘biga’ rather than SD starter, but I just replaced the instant yeast with 45g of my stiff starter (50% hydration) and carried on as per the recipe feeding it with 65g water and 100g AP flour to start the bread off. I left this overnight to ready itself. The bread dough recipe uses 167g biga, 350g water, 300g AP flour, 200g rye flour, (2tsp instant yeast*) and 10g salt; I however only had 50g of rye in the cupboard so made do with the 50g and added in 150g whole spelt as well! 100g of thick cut prosciutto cut into decent size pieces is also required –ask for it to be cut thicker than usual as you want bits that are thin enough to chew, but substantial enough not to get lost in the dough. I mixed it all together (*but left out the yeast), autolysed for about 20mins, then kneaded it on my KA #4 for about 15mins. It bulk fermented for a couple of hours at RT (made it in July, so winter indoor temp); shaped it into a couple of torpedos (this shape was recommended to ensure the bread has plenty of rich, dark crust encasing the soft interior); proofed at RT for a couple of hours; then baked in a well heated oven at about 210C for 30 minutes.

They didn’t get to cool off for very long before eating as I took them around to a friend’s house to enjoy with dinner. The lovely hammy flavour was fab in the bread, as was the nice moist crumb. A bit more rye would have been nice in the dough, but the spelt’s earthy flavour did a fine job of complementing the prosciutto.