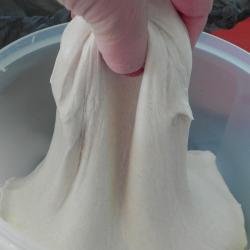 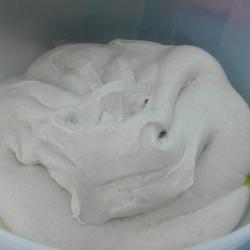 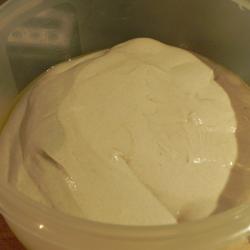 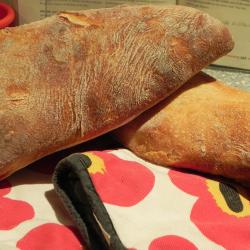 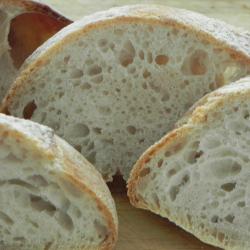 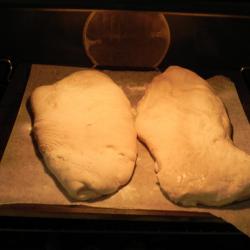 For a French bread, this one is very like an Italian loaf!  The first couple of times I made it, I wanted to shape and slash it, but it will have none of that!  It is a wet dough with a dash of rye, which you don’t need to be a master to shape, does well after a nice long retardation, and looks like a ciabatta.

I have made it before, but I don’t think I kneaded it enough, and this time I used Mr Purple (my Kitchen Aid) and followed the recipe exactly.  Maybe because it’s such a wet dough, it takes longer for the gluten to develop.

So it starts off with a stiff levain – 45g stiff starter, 50g water, 95g bread flour, and 5g wholemeal flour.  I hadn’t used my stiff starter for about a month and it was looking a bit crusty, so I gave it 2 feeds before making the loaf, one on Saturday morning, and then the 2nd on Saturday night.

Sunday morning I started making the dough – well according to my baking notes, I didn’t actually start until 12.30pm (must have been a slow start morning!).  Mixed the ingredients - 500g total flour weight (10% rye, 90% bread/AP flour); 400g water (80%); 125g stiff starter (25%); and 15g salt - together roughly (in Mr Purple) and then let autolyse for ½ hr.  At 1pm, I turned Mr Purple up to 4 and let him do his thing for 12 minutes.  Recipe said to knead for 12-14 mins until glossy, stretchy and smooth.  At 10 minutes I cleared the sides of the bowl and did a window pane test and it all looked ok.  It was a lovely looking dough – exactly as Mr Leader had described.

I then transferred the dough to an oiled bowl and covered and let ferment at room temp (approx 20C) for an hour.

Gave it a couple of stretch and folds at 2.30pm and let it sit for another 1.5hrs at RT before tucking it into the fridge for the night at 4pm.

Just before baking I tipped the dough onto my floured (rice flour) bench, gently pushed it out into a square, cut it in half with dough cutter/scraper thing.  The dough felt beautiful – soft and stretchy.  Picked up each piece in turn and gently stretched it (it kind of did this itself due to softness of dough) and then laid on baking paper on peel in whatever shape it took.

The oven had already heated up to about 230C (450F) and I cooked them without further preamble for about 30 minutes.  They came out looking a lovely dark golden brown.

The crumb was moist, open with long troughs running through just as Mr Leader described.

I was much happier with these loaves than the previous attempt – I think the timing making this bread is quite different from that of other French breads.  This is a lovely bread that I would most definitely make again and again.

Looks great and this is one of my favorite breads to make and eat.

How do you prevent the dough in a fridge from being dried ?  Oiling ?  I did several methods with a wet towel  , but it didn't satisfy me.

It is great LD - completely agree.  did I mention I made the blue cheese loaves!  The smell whilst baking was almost unbearable!  next post!

When I put the dough in the fridge molifemo, I have a lid on the bowl and put the bowl in a plastic bag.  The dough is in a lightly oiled bowl and invariably the dough is slightly oiled as I do my stretch and folds on an oiled bench.  I've never had a problem with dough drying out.