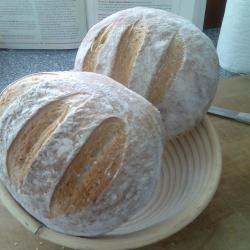 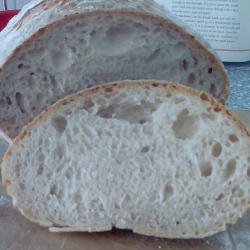 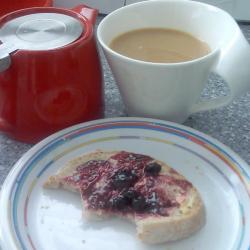 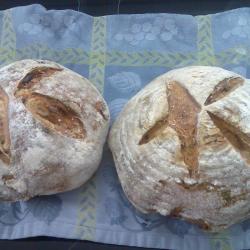 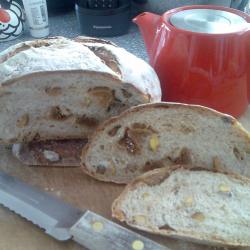 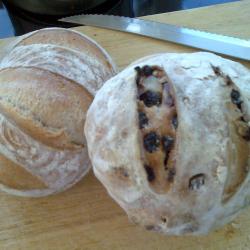 I have made this bread several times of the past few weeks, but have not had time to write about it.  It is the 3rd sourdough bread in Daniel Leader's book, and uses a liquid levain at 130% hydration.  The dough is made with a combination of flours - 88% AP, 6% wholemeal and 6% rye - which give a much richer flavour than just using AP, but without being at all heavy.

It is not as wet a dough as the pain a l'anciennce and for 500g of mixed flour has 250g water, 310g of levain, and 10g of salt.  As per all of Mr Leader's recipes I have used so far, he autolyzes the flours and water for 20 mins, prior to adding the levain and salt.  I have previously mixed all ingredients together and then autolysed, but I can understand that the gluten is already developed in the levain, and so you are just giving the new flour a bit of catch up time (I'm presuming) with the flour only autolyze.

The dough was fermented at RT for about 3hrs and shaped into boules.  I used my round banneton for one of my boules, but since I only have the one, the other boule got to rest up in my colander lined with a cloth, which works just as well.

I proofed one at RT for about 1.5hrs and the other overnight in the fridge, and baked straight from cold the next morning.  Loaves are so much easier to slash when cold!  Makes me want to always do an o/n proofing.  Both were baked at about 230C for 15mins with steam, then at 200C for about 25mins or until they are a nice golden colour.

Both loaves were delicious, although the proofed-in-the-fridge loaf I think was nicer – better crust and perhaps more oven spring (slashes looked better too – front loaf in pic above).

I managed to hog my way through one loaf for breakfast everyday for a week (that is the loaf lasted all week, I didn't eat an enitre loaf each day!).  Admittedly it didn't last all week, but it was fresh enough to eat untoasted for the days that it did last!

Mr Leader recommends the addition of raisins and walnuts to the bread.  I made a fig and pistachio version – soaked the figs (about 3/4c) in water, (I then used the water in the dough) and dry roasted the pistachios (3/4c) before adding to the bread.  This looked and tasted fabulous!  It was great with honey and also with a lovely hard goat cheese as well as a creamy blue.  I attempted to create a "signature slash" - hopefully you can tell that it's a K?  And it turned out ok, considering .......

The figs were wonderful in the bread, I do love figs.  I wonder how it would go with fresh figs, but then it would almost be a waste to use them in bread as they are so delicate.  But fig/pistachio bread with fresh figs and a soft goat's cheese drizzled in honey would be blimmin tastey I bet?!

I next made it with raisins and dry roasted pecans – this was also great, although that was a report from a friend as I gifted this loaf, hence no crumb shot.

I am also making this bread again today – needless to say, I like it a lot!

Several other people have posted recipes for Pain de campagne – it is a GREAT bread.

But fig/pistachio bread with fresh figs and a soft goat's cheese drizzled in honey would be blimmin tastey I bet?!

Oh my god, that would be amazing!  This is my next loaf.  Firing up my wood oven for the first bread bake tomorrow, I think this will have to grace the oven floor!

Do post pictures of you scraping out the coals!  In fact take lots of pics!  Can't wait to hear/see how it goes.   Saw a very brief bit on tele the other day about wood firing and chucking in a handful of flour to check the temp. Good luck!

What a great volume your breads have ...I am still struggling with lack of yeasts' activity which ends up with small and dense breads.

What was your room temperature ?  When you let the other dough in the fridge for prooving, wan't there any drying ?

Thanks Mo.   RT is about 18-21C at the moment.  when I put loaves in the fridge for proofing, I put inside a plastic grocery bag and tie it off.  Sometimes I cover with a tea towel (dish towel) first then put them in the plastic bag.  i do the same for loaves I leave at RT to proof as well.

How old is your starter i.e. is it just a baby, or have you had it on the go for a while?  And when do you feed it before making bread?